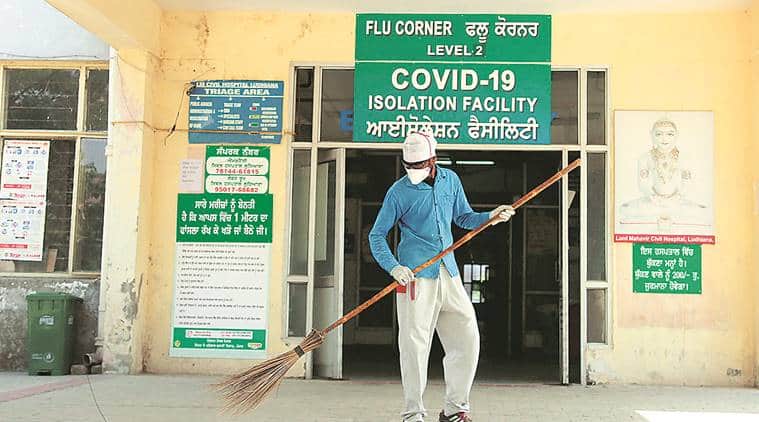 At the Civil Hospital in Ludhiana. (Express Photo by Gurmeet Singh)

THE LEVEL-I Covid Care Centres (CCCs), for “pre-mild” or “mild” cases, don’t have a single patient. And, with the spike in cases under control, non-Covid treatment will soon be fully available at the Civil Hospital, the main government healthcare facility in the district.

That’s the good news from Ludhiana. But a deeper dive reveals a few glaring holes in the narrative.

There are no ventilators or ICUs in government hospitals, and Punjab’s most populated district with over 35 lakh people is completely dependent on private facilities for Level-3 treatment of cases with “severe” symptoms.

There are 30 ambulances available under the 108 scheme but not one with Basic Life Support (BLS) equipment.

There were also protests last week by doctors at the Civil Hospital over “faulty masks”. And several videos of low-quality food provided to Covid patients at Level-2 isolation centres have been doing the rounds on social media.

“There is no ventilator in any government hospital in Ludhiana district. Four ventilators were lying unused at the Civil Hospital for more than a year without expert staff to operate them. These machines were moved to the Christian Medical College and Hospital (CMCH) nearby, which is a Level-3 facility,” says Dr Rajesh Bagga, Civil Surgeon, Ludhiana.

The ventilators were shifted after an “incident” on March 31, when the hospital could not offer the service to a 42-year-old patient who was then referred to the Rajindra Medical College in Patiala where she died within hours. “We have oxygen beds with a centralised suction system, but no ICUs,” says Bagga.

Speaking to The Global Express News, State Health Minister Balbir Singh Sidhu points out that the government has created a five-bed ICU in CMCH. “But yes, our government hospitals must have all these facilities. We have made a plan worth Rs 600 crore for upgrading health infrastructure under which ICUs will be created in all district headquarters,” he says.

Ludhiana Deputy Commissioner Pardeep Agarwal says “good facilities” have been set up. “For Level-3 patients, we have tied up with private hospitals where we refer patients to, if the need arises,” he says.

But for now in Ludhiana, this means that while the government has earmarked 2,550 beds for Level-1 Covid treatment, and 450 to isolate Level-2 “moderate cases” in Dedicated Covid Health Centres (DCHCs), all the 84 beds and 31 ventilators for Level-III patients are in private hospitals.

“There were also the protests over masks with faulty respirator valves. Now the supply has improved, and kits are arriving in sufficient quantity. The issue was raised after four ward helpers tested positive,” says Dr Devinder Sandhu, a doctor at the Civil Hospital.

The quality of food, and its non-availability on time, has been an issue, too. “Now, the situation has improved,” says an asymptomatic patient, speaking over phone from an isolation centre.

Across the district, meanwhile, the CCCs are empty with 1,897 people currently in home quarantine instead. “When patients test positive, we shift them straight to DCHCs. We treat all positive patients at Level-2, whether they have mild symptoms or moderate,” says Bagga.

Out of 84 beds in Level-3, 25 are occupied, including in the big four: CMCH, Dayanand Medical College and Hospital (DMCH), Fortis Hospital and SPS Hospital. So far, four patients required ventilator support but all of them died later, including a 52-year-old Assistant Commissioner of Police in Fortis Hospital on April 18.

And yet, Ludhiana has managed to keep up with the spike.

Officials say the surge was largely due to the return of residents stuck in a gurdwara in Maharashtra’s Nanded, migrant farm workers arriving from Gwalior and Jaisalmer, and students coming back from Kota. “In Punjab, over 8,000 such people arrived in 2-3 days of whom over 300 came to Ludhiana,” says an official.

Moreover, with the city being a referral centre, 90 of the total cases are from other parts of the state, including 53 Railway Protection Force personnel who had come from Delhi on duty. Of the 14 deaths, six were of patients from outside the district, including an RPF personnel.

“Ludhiana is a referral centre because there are many tertiary care hospitals here… All the patients, among those who returned from Nanded, Jaisalmer, Kota and Gwalior, have been discharged, except for a 54-year-old asymptomatic patient who died on May 18 due to a cardiac arrest,” says Bagga.

Apart from the Civil Hospital, there are four swab collection centres in the DCHCs, one at the railway station and another at a residential school in Kitchlu Nagar, which is also a CCC. “We can send upto 350 samples a day to government laboratories in Patiala and Faridkot,” says an official.

According to the Civil Surgeon, asymptomatic patients are now being discharged on the tenth day without a second test. And the focus now, he says, is on providing treatment to non-Covid patients.

“We have got a letter from the Health department to rationalise staff posted in CCCs and DCHCs so that we can start non-Covid facilities. We are thinking of converting 150 beds at the Civil Hospital back for non-Covid use. We were able to handle the spike, but now dengue and malaria patients, and those needing critical surgeries, need to be taken care of,” says Bagga.